These are for the term from January to June 2015.

CC 5: Your Body Speaks
Now what does that mean?

Rob Turner had handled Projects 1-4. They were all very interesting speeches and very competent. They were all fascinating stories of his experiences as a child in England in the Second World War. Yes, a fair while ago.

In the first 4 minutes Rob mimed speech and action but no sound issued out of his mobile mouth. Fairly quickly we worked out he was putting up something on the wall. Two of them. Big pictures? No – were they …? yes, mirrors! – because when they were completed he admired himself in one of them and was appalled at his expression in the other. 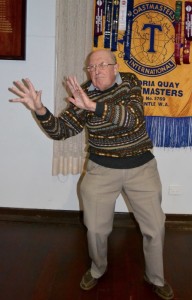 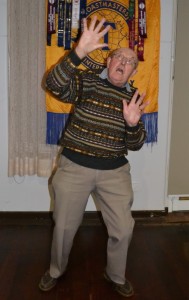 Where was this going?

Then we found out as he “stepped over the window sill” and addressed us.

Body language! Unless you are a mime artist on stage like Charlie Chaplin or Marcell Marceau, if you want to communicate you have to use words as the basis of your communication.

In the next two minutes Rob discussed the relation between our words and our body language. Obviously the ideal relationship is of a harmonious cooperation where our bodies enhance the message.

Then Rob stepped back over the window sill and cleaned the mirrors before he was satisfied and gave a final silent message to the audience before he signed off.

We always have the Evaluation straight after the speech. Evaluator Antony Svilicich carried on the project by miming his first sentence before stepping forward, over the window sill, and delivering audible speech. But he didn’t step back into the room!

No-one present had heard – no – experienced a speech like that before.