The Agenda – without Table Topics

Opening the Meeting – Sergeant at Arms Peter Carrie had organised the different seating style and he opened the meeting at 6pm with his standard, clearly presented meeting protocols.  He welcomed 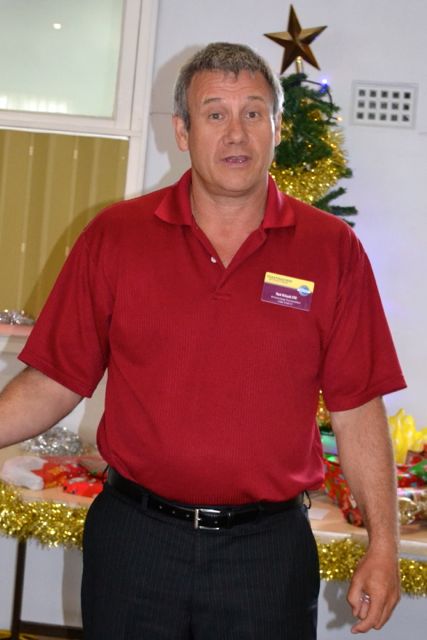 Mark has belonged to Victoria Quay since September, 2001.  He has been a very active member but in recent years other Toastmaster activities and family matters have made it difficult for him to attend.  This is only the 4th time he has been able to be with us in 2013. 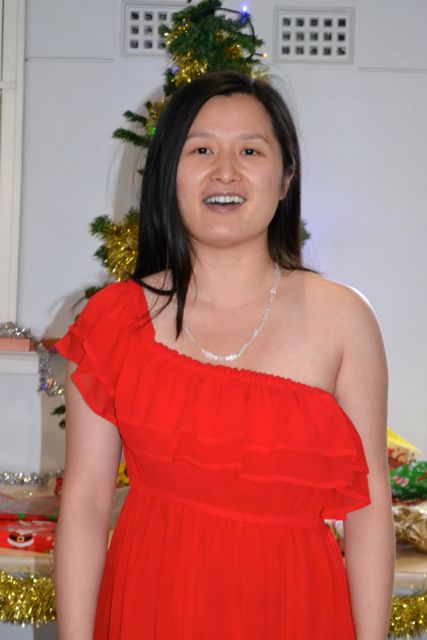 Qin Guo delivered the two minute Inspiration.  She has been inspired by her membership of Victoria Quay.  She shared her experience and urged everybody to take advantage of the opportunities the club offers.

Then it was time for the first round of

President Dave Finnimore had organised a Christmas tree, suitably decorated.  Members and many guests brought along inexpensive, wrapped presents which were grouped around the tree.  As Toastmaster Mark named them, the Table Topics speaker went out to the tree, chose a gift, unwrapped and displayed it, and then spoke about it or something related to it.  There were ten speakers in the first round. 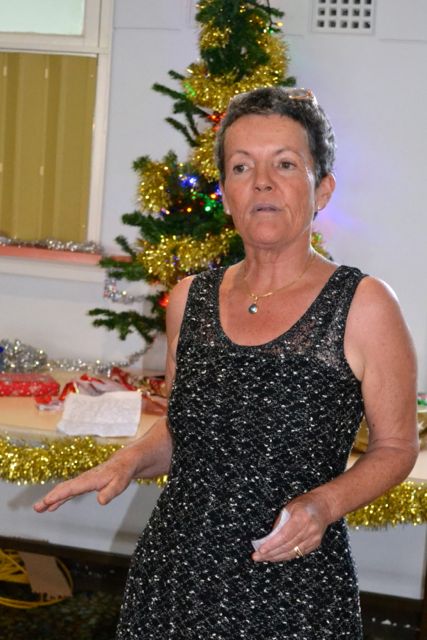 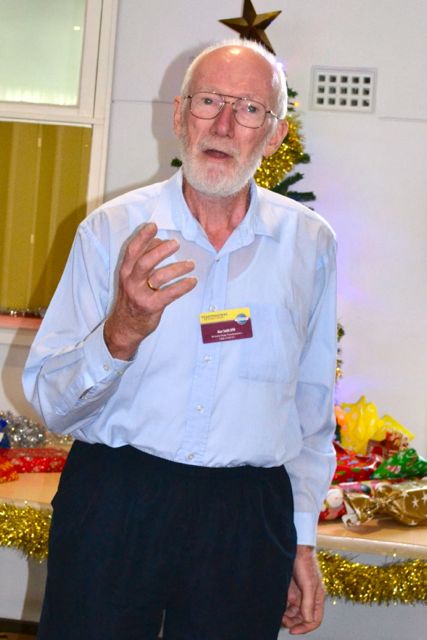 Mary-Kate Muir delivered her third speech from the Competent Communicator Manual with the title Keep it simple.   We already knew from her two previous speeches that MK specialises in humorous speeches, with fantastically embroidered stories leading up to the twist – the surprise ending.  Her story was set on a farm in Ireland – she comes from Ireland – where the laconic farmer turns the tables on the supersmart European Union parliamentarian. 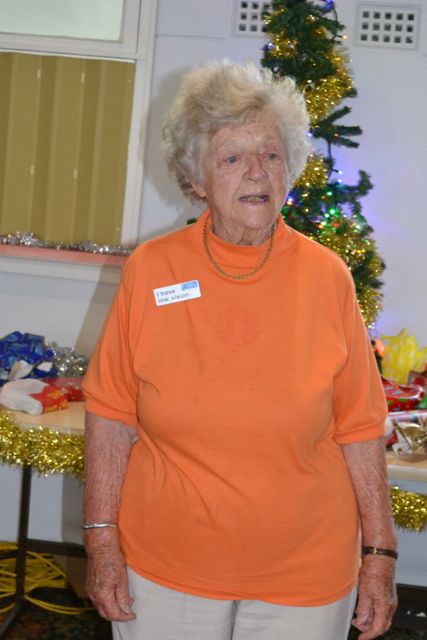 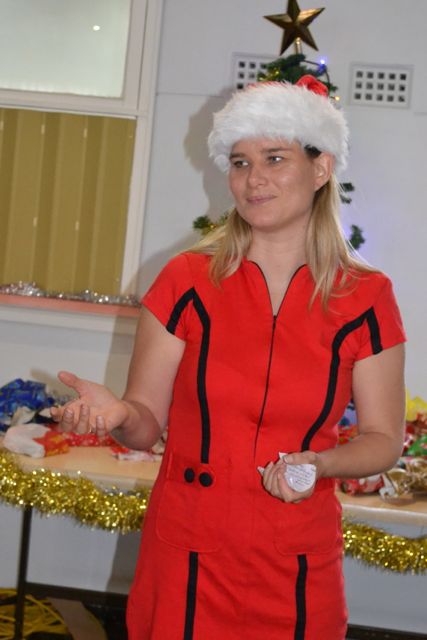 Nicky Quekett has recently rejoined Victoria Quay after her earlier membership in 2006.  Her speech – Flight – was her eighth, so she is close to completing her Competent Communicator Award.  At the time of the Tianemin Square riots and massacres in Beijing, Nicky was teaching English in a remote Central China community.  She received an urgent message to leave immediately and escape to Hong Kong, because she was the only foreigner left in Central China.  Her gripping speech took us over the mountains, down to the river, out to sea into a small typhoon.   and eventually to a friend’s house in Hong Kong.   Timekeeper Kecci Slater kept timing Nickky as she went overtime but didn’t spoil the story by stopping her.

Then it was time for the second round of Table Topics when we had another 16 gifts and speeches.

A Toast from Peter Law 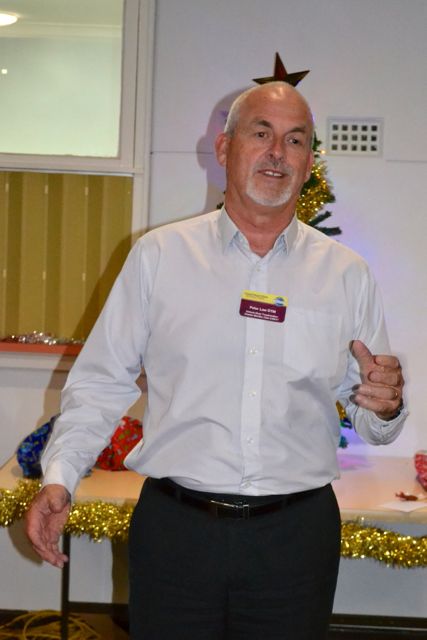 Peter toasted Victoria Quay.  There are over 13,000 Toastmaster clubs in the world.   VQ is one of only 48 Toastmasters Clubs to have achieved Presidents Distinguished Club with all ten Goals for each of 9 years since the award was created.  He spoke about the personal benefit he has received and urged our visitors to take advantage of the opportunity to join the club and get the same benefits that he has enjoyed.  He drew attention to  the three current Founding Members still in the club – David Nicholas, Glenis Nicholas and Alan Smith.  He noted the focus on Distinguished Toastmaster Awards – there have been many more over the years, but David Nicholas, Glenis Nicholas, Alan Smith, Mark Richards and Peter himself are current members who have attained one or more of these awards.  Mark Richards was the first District Governor in our District 17 when we achieved that status in 2011, and former member Pascale Amberville-Colby is the current District Governor.

As Peter was speaking, President Dave Finnimore and Kjersti Vinje were distributing glasses and a drink, so Peter led us all in a toast to Victoria Quay. 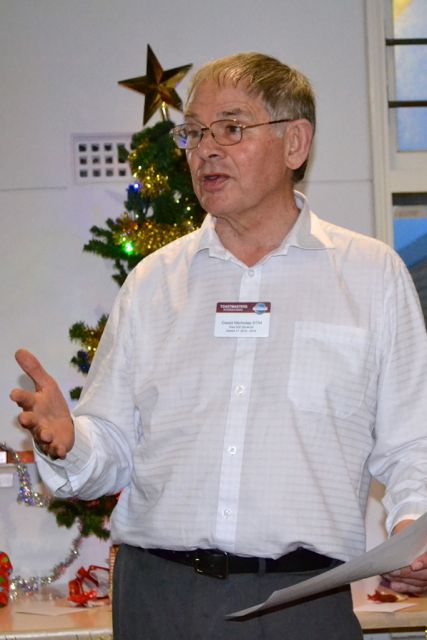 We have many members who put in more than the usual effort to keep the club performing so well.  David Nicholas presented three such members with special awards 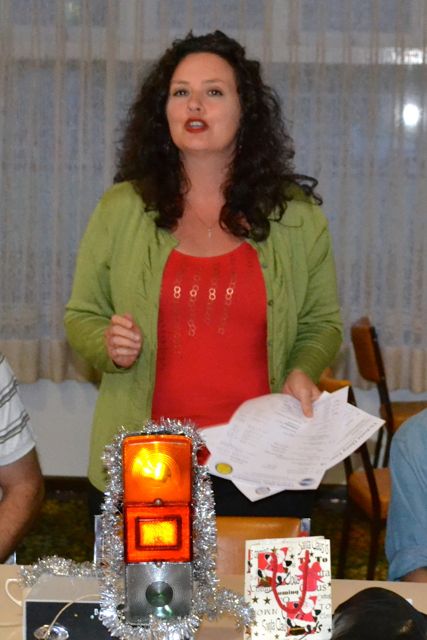 All 28 members and visitors gave a final brief presentation about their experience of the meeting. There was a lot of friendly laughter.