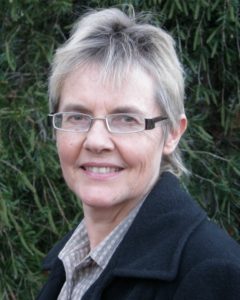 Lynne Brighton received her award on July 1, 2011. Lynne is a member of several clubs but lodged the award with Guildford Stars.

In 1998, I had been thinking about doing something about my terror of public speaking, when I saw an article in a local newspaper about a Toastmaster, Marie Tate, who had won the Marion Barnes award. I called the number in the article and spoke to Marie. I joined Swan Club but later joined Guildford Stars (formerly Morning Star) as a club coach and Kalamunda as a mentor.

Judith Allen suggested that we become club coaches of Guildford Stars. We managed to increase the membership to 20 over 2 years, much to our great relief, thus achieving one of the requirements for the Advanced Leader Silver (ALS) award.

As part of the requirements of the ALS, I wanted to present a community Speechcraft course but had very little interest! So instead, I presented The Art of Effective Evaluation to about 13 members from several different clubs. It was a great way to learn about PowerPoint presentations. I became very relaxed about trouble shooting; you know what I mean, when you lose the picture in the middle of your show and have to find it again in a hurry?

For my third advanced manual towards the Advanced Communicator Gold, I chose Technical Presentations. I found some of the project speeches quite challenging, particularly the project 5, the 30-minute group presentation, which was on a science-related topic. My co-presenters were Judith Allen and Martin Lindsay. Coincidentally, the night we performed, one of our visitors happened to be a science teacher. I told him it was especially for him! He joined.

The most satisfying parts of my years in Toastmasters have been both serving as a Club Officer and mentoring new members. I’ve found that just saying the right words of encouragement at the right time to a new member, can make a lot of difference to their confidence and progress.

Swan and Guildford Stars both celebrated their 20th birthdays this year. At Guildford Stars’ birthday meeting, some of the founding members, including Marie Tate, were present and I gave a speech about the club’s history. I spoke about the newspaper article and how it encouraged me to join and revealed the original copy, slightly yellowed after 13 years!

I thank the members of Guildford Stars, Kalamunda and Swan Clubs, many of whom have become friends. Finally, I want to thank two important people-Judith Allen and Martin Lindsay for their inspiration, encouragement, help and friendship.