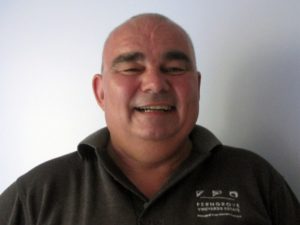 Gerry Prewett received his award on Mar 27, 2012. Gerry is a member of several clubs but lodged the award with Western Founders.

It was almost exactly four years in the making. When I attended the inaugural meeting of Cannington Communicators, in March 2008, at my workplace I decided there was no point ‘hanging back’ and gave my Icebreaker speech. Within that first year I had gained the Club’s first CC award and had joined the Committee as VPPR.

My CL took a little longer but I was getting a hang of this ‘toastmaster thing’. With Sue Veloczi as Area Governor and Robyn Richards paying visits the club was well mentored.

At the start of the 2009/10 TMI Year I was asked if I would be prepared to serve as an Area Governor. At the time I wasn’t even thinking of this being part of the DTM track, I was honoured to be asked. What a great year that was! The Area was Presidents Distinguished. Together with Sandra Morton I chartered a new club in Victoria Park, managed to complete both ACB and ACS awards and an ACB.

Then came my second spell as an Area Governor and this was much harder. I’d joined all five of the Clubs in my ‘home’ Area for my first stint, the Area Governors Club and Marketers. There was no way I could join four more! Without having the regular contact with clubs it was much more challenging and it was an abject lesson that Toastmasters wasn’t all ‘beer and skittles’.

There was a slight delay in my plans at the end of the last TMI year when one of my clubs needed an Advanced Communicator award. I’d done all the speeches for my ACG but nothing else. I duly lodged a second ACB and enabled the club to achieve President’s Distinguished.

With the completion of a Speechcraft course in March all the pieces of the jig-saw were in place. And what a course it was too. All my Speechcrafters completed the course, even if it meant there were 15 speeches on the last night!

So what have I learned? For starters, it’s all about the journey, not the destination. Whilst the DTM is a fabulous reward the learning process and leadership opportunities are fantastic. It’s the reason I’m back on the train!