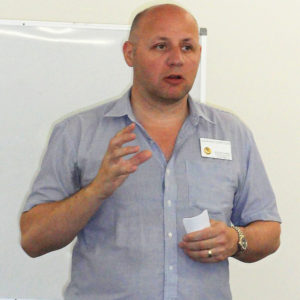 Gawain Simpson received his award on October 5, 2011. Gawain was a member of several clubs but lodged the award with Sandgropers.

Achieving his DTM Award in October 2011, marked the end of a journey in Toastmasters for Gawain.

A member of a number of clubs, including his home club Sandgropers and Western Founders, Gawain was actively involved in all aspects of Toastmasters. He took on a number of Club Officer roles including three terms as President.

In 2009—2010 as Innercity Division Governor, Gawain was instrumental in the formation of the new clubs Toast2FS and TEEM, both of which he co-founded with David Nicholas.

Gawain’s passion for speaking humorously was reflected in his Toastmaster achievements as a contestant, a workshop presenter and Humorous Speech contest chair at District Convention.

Gawain was a wonderful cook. Morning tea at Western Founders when it was Gawain’s turn was a culinary delight, as were meals at his home for those lucky enough to be invited. He bought the best Belgian chocolate in 10 kg blocks.

Soon after achieving his DTM, Gawain left District 17 for greener pastures in Europe with his wife Dani.