We celebrated our 600th Meeting on Wednesday, August 8th. 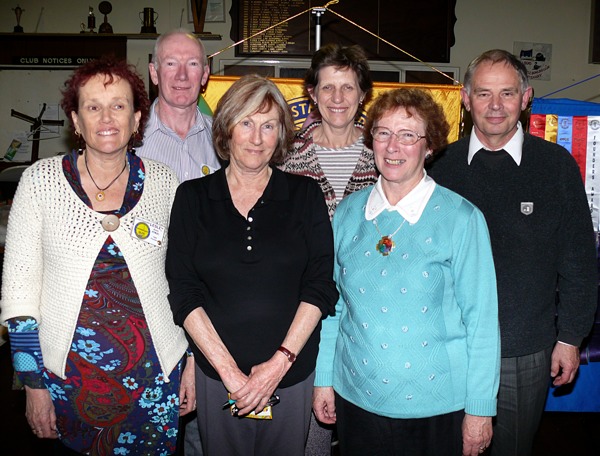 It was a fantastic meeting with 40 people there. There were 20 members, 13 former members and 7 visitors. Among the former members were 6 Founding Members, from 1995.

The whole meeting was crowded with highlights, controlled effortlessly by Toastmaster and former member Cliff Boer.

The Check In was a wow. It was split into two sections to cope with the crowded room. Everybody gave their name, when they belonged or joined the club, and a highlight or two from their time. And everybody got photographed as they spoke because Andy Outh-Aut, Fremantle professional photographer and married to former member Mary, was on the job. The Check In was a riot of reminiscence, revelation and rapturous retrospection. We haven’t had a funnier meeting in the whole previous 599.There were three speeches – Nicky Quekett on her nightmare train journey through Central Europe, Mark Richards using Stepping Stones in his Toastmaster journey to Division Governor, and Alan Smith Plodding.

There were two sets of Table Topics delivered by Glenis Nicholas and Sharon Wayland. Again there were gales of laughter throughout and gasps of apprehension as Janet Boer-Draffin shed whatever inhibitions she may have had before she put that hat on.Judith Ingle, a founding member who rejoined in January this year, inspired us at the beginning of the meeting and Mary Outh-Aut, another founding member who hasn’t rejoined yet, gave us a tonic about doing one small extra thing to keep the world cleaner and better.

Claire Lacey mounted her Soapbox and revelled in her progress to freedom and individuality.Former member David Parkhouse rejoined the club after a 5 year break.District Governor Mike Helm identified Victoria Quay as the powerhouse incubator in Western Australia for many years now. He mentioned 7 DTM members during the Club’s history – Lesley Amm, David Nicholas, Glenis Nicholas, Peter Nichols, Jenny Mills, Alan Smith, Lisa Cluett and Betty Hart. He particularly praised us for the many District leaders who have served in WA and the whole District, including the current Western Division Governor, Mark Richards, and the current W21 Area Governor, Michail Overkov.

Lynn Peirce mounted a spectacular supper. The food was great and many people used the opportunity to circulate and renew acquaintances or meet some of colourful members from past years.Was it serendipity or the influence of this wonderful meeting that inspired former member, David Parkhouse, to attend the previous week and rejoin on our 600th. David was a member from June 1998 to September 2000, and was VPE during that time. He signed the membership application and paid Treasurer Alan Smith the fee before the meeting began, so he attended as a current member. Welcome back, David, and any other former member who feels the urge will get the same warm response.

We had 6 of our 20 Founding Members at the meeting. Glenis and David Nicholas of course and Alan Smith have been members right through. Judith Ingle took a break towards the end of 2003, but rejoined at the beginning of this year. Lesley Amm and Mary Outh-Aut were there at the beginning and visited us on this exciting night.